No Atheists in Foxholes?

Posted on September 4, 2010 by commieatheist

Fascinating story in the Wall Street Journal today about a Navy Chaplain,  who is a young-earth creationist and Bible literalist, and his assistant, who is an atheist:

Together they roam this town in Taliban country, comforting the grunts while crossing swords with each other over everything from the power of angels to the wisdom of standing in clear view of enemy snipers. Lt. Moran, 48 years old, preaches about divine protection while 25-year-old RP2 Chute covers the chaplain’s back and wishes he were more attentive to the dangers of the here and now.

It’s a match made in, well, the Pentagon.

“He trusts God to keep him safe,” says RP2 Chute. “And I’m here just in case that doesn’t work out.”

I think I smell a sitcom here.

Lt. Moran takes the Bible at its word, rejects the evolution of species and believes the Earth to be 6,000 years old. He carries a large Bible with him into the combat zone, while RP2 Chute totes writings of Richard Dawkins, the evolutionary biologist and fierce critic of the notion that God designed the universe.

Philip Chute was raised a devout Baptist in Nova Scotia and moved to Greenville, S.C., as a teen. His avid reading of the Bible, however, weakened his belief that fact lay behind faith. Soon he was a “full-blown atheist,” he says.

The chaplain put his faith in God’s protection, while the soldiers responsible for keeping his butt intact have to keep telling him to keep his fucking head down:

“Hey, sir, don’t get out of the vehicle until I lay down a sniper screen,” Gunnery Sgt. Mark Shawhan, an agnostic with a suspicion of organized religion, instructed Chaplain Moran before the patrol. “That’s where he’s been getting us, and when you cross the bridge—RUN.”

Lt. Moran wasn’t troubled. “I believe the Lord is going to protect us,” he said. But he wondered aloud whether to finish his Meal, Ready-to-Eat packaged lunch before heading to the armored vehicle.

When their turn came, the chaplain and his assistant bolted across the bridge and pivoted into a cornfield, where the minister stood upright. RP2 Chute shouted at Lt. Moran to get down. “Take a knee,” he yelled…

At the end of the foot patrol in Sangin, the Marines sprinted back over the metal bridge and jumped into the armored vehicles that waited on the far side. Lt. Moran crossed and then stood for many long seconds in the open, clearly visible from the compounds where the Marines suspected the insurgent sniper had his nest.

On the near side of the bridge, Gunny Shawhan got out of his own vehicle to yell at the chaplain to take cover, but Lt. Moran didn’t seem to hear over the noise of the engines. “Tell the [expletive] chaplain to get behind the goddamn vehicle,” Gunny Shawhan yelled into the radio.

“Like bullets aren’t going to kill the goddamn chaplain,” he muttered to the men near him. 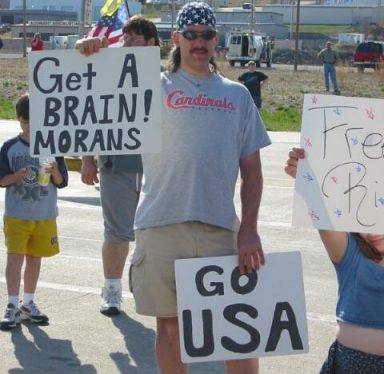 This entry was posted in Why Religion Sucks. Bookmark the permalink.